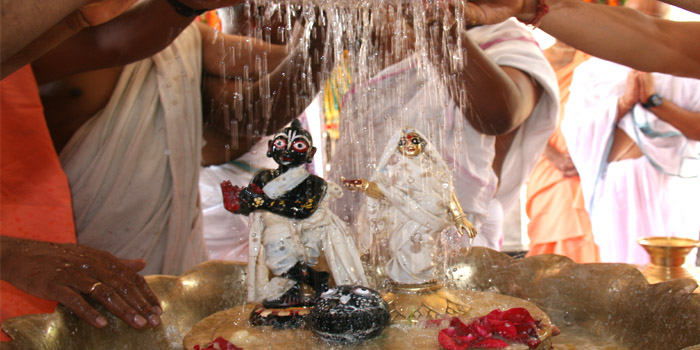 When the Lord comes to this world he doesn’t take birth like ordinary human beings but appears out of His own sweet will. Whenever there is a need for the protection of devotees the Lord appears. The Supreme Lord incarnates in many forms like Matsya the fish, Varaha the boar, Narsimha the half man half lion. All these forms of the Lord are very attractive to His devotees who take great pleasure in talking about his pastimes.

Whenever and wherever there is a decline in religion and the rise of irreligion the Lord appears millennium after millennium.

One such famous incarnation of The Supreme Lord is Lord Rama. The birth of Lord Rama is celebrated as Rama Navami. Lord Rama was born to King Dasharatha and Queen Kausalya in Ayodhya. He had three younger brothers Bharata, Lakshmana and Shatrughna.

The Ramayana narrates the history of Lord Rama – the great King, Husband, ideal Son and Master. Lord Rama was an ideal son. He always obeyed his father and had great respect for his mothers. He was a perfect King and ruler. Lord Rama ruled for 14,000 years. His reign till today is called Rama Rajya. When Lord Rama was ruling his people there was no famine in his kingdom, no scarcity of food and no disease ever affected anyone. The people in his kingdom had a strong bond of love with Him. They lived only to serve and please Him. He was very strict with troublemakers and punished them when necessary. He was handsome, strong, brave, chivalrous, fair, just, gentle, sweet, kind and always merciful to His devotees and all the citizens.

The festival of Ram Navami marks the birthday celebrations of the Supreme Lord Sri Rama. According to the ancient Vedic calendar, it falls in the Spring season. It is considered auspicious to undertake a fast on the day in the name of Rama. Devotees perform elaborate worships and chant the name of Rama. Temples of Rama decorated with flowers, leaves and have special services and bhajan sessions throughout the day. Stories from the Ramayana are read out in joyous public gatherings. Most people fast until midnight.