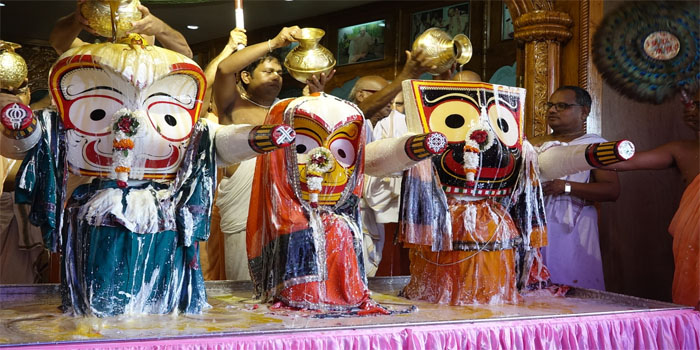 On the full-moon day, sixteen days before Ratha-yatra, Lord Jagannath is bathed. He becomes sick and is confined to rest for fourteen days. He is then offered special care until He comes out for Ratha-yatra.

A special bath of Jagannath takes place on the Purnima of Jyestha month, to commemorate the appearance day of Lord Jagannath. According to Skanda Purana when Raja Indradyumna installed the wooden deities he arranged this bathing ceremony. This day considered to be the appearance day of Lord jagannath. ‘Niladri Mohadaya’, a religious text written in Oriya records the rituals of the festival. Lord Jagannath in His early form was being worshipped as Nilamadhava by a Suara chief called Viswabasu. The story is nicely told in the drama Jagannath Priyan natakam. Till now it is the Daitas and Suaras who have the exclusive right to conduct the festival. On the previous day of Snana Yatra the dieties of Jagannath, Balabhadra and Subhadra along with the Sudarshana are ceremonially brought out from the sanctum in a procession to the Bathing pandal. It is at such a height that visitors standing outside the temple also get a glimpse of the Deities.

On the the day before the bathing when the Deities are taken out in procession, the whole process is called Pahandi or Pahandi vijay. For this festival the Bathing pandal is well decorated with traditional paintings of trees and gardens. Flags and arches strung with mango leaves are also put up. The Deities are profusely decorated with flowers. All kinds of perfumes such as Dhupa, Aguru etc. are then offered.

In Puri the bathing procedure is as follows, After Mangala Arati, the Suaras and Mahasuaras go in a ceremonial procession to fetch water from Golden well in one hundred and eight, vessels of copper and gold. All of them cover their mouths with a piece of cloth so as not to contaminate it even with their breath. Then all the vessels filled with water are preserved in the Bhoga Mandap. Then they purify the water with turmeric, Benachera, Chandan, Aguru, flowers, perfumes and medicinal herbs.

The bathing festival takes place during the morning hours of the purnima tithi. The filled vessels are carried from Bhoga Mandap to the Snana Vedi by the Suaras in a long single line procession.

After the Snana Yatra, the Deities are kept away from public view for fifteen days and during all these days the daily rites of the temple remain suspended. When Jagannatha was absent from the temple, Caitanya Mahaprabhu, who could not see Him, felt separation and left Jagannatha Puri to go to a place known as Alalanatha. As Jagannatha himself instructed, after this ceremony, he is not seen for a fortnight. The Deities are kept on a special “sick room” called the Ratan vedi inside the temple. This period is called ‘Anabasara kala’ meaning improper time for worship. During these fifteen days the descendants of Viswavasu repaint and restore the Deities and Jagannath’s fine decorations. On the 16th day the Deities in their new forms after renovation become ready for the public view darshan. The festival of the first appearance of the Lord Jagannath to his devotees is called Netrotsava.