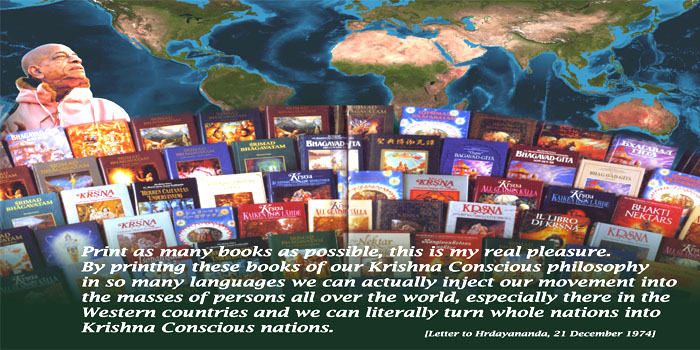 His Divine Grace A.C. Bhaktivedanta Swami Prabhupada, Founder Acharya of ISKCON, established Bhaktivedanta Book Trust for giving a permanent shape and management of the Vedic literatures like Srimad Bhagavad Gita As It Is, Srimad Bhagavatam, Sri Chaitanya Charitamrita etc. Presently the Bhaktivedanta Book Trust is the world’s one of the largest publication wings and books of Srila Prabhupada are being printed in hundreds of languages of the world and being distributed by the devotees of ISKCON.

Srila Prabhupada’s books have been changing the hearts of millions of people in the world.

There is also an English division of Gopal Jiu Publications run by H.G. Madhavananda Dasa, a dear disciple of Srila Gurudeva. His publications are popular and are sold in Vrindavana, Mayapur and abroad.