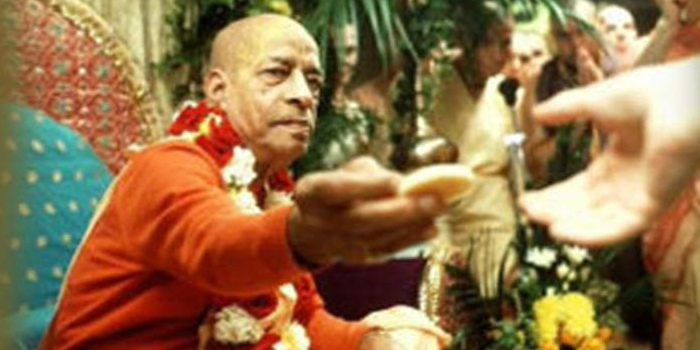 The International society for Krishna consciousness (ISKCON) is a well-known worldwide organization which is awakening spiritual awareness of the people, who are being misguided by modern education for running after material opulence forgetting the real aim of their life. Apart from preaching, spreading of Krishna consciousness through Nama-sankirtana and chanting of Maha-Mantra, ISKCON has been operating in various benevolent programmes of which the Food for Life program occupies a very important place.

n 1974 His Divine Grace A. C. Bhakivendanta Swami Prabhupada, the Founder Acharya of ISKCON noticed at Mayapur, a group of village children fighting with street dogs over scraps of food.Shocked and saddened by what he saw, Srila Prabhupada told his disciples, “Imagine how hungry they are. God is the father; wherever there is father, children should not be hungry. A temple therefore is meant for free food distribution. No one within ten-mile radius of our temple should go hungry. I want you to begin distributing food immediately.”

These prophetic words inspired his followers. A global network of free food kitchens, cafes, vans and emergency services were soon established. The Hare Krishna Food for Life has emerged as the world’s largest vegetarian food-relief program.

In the ISKCON Bhubaneswar Centre, the Food for Life programme was started since inception of the temple. It has been gradually gaining momentum. Delicious Khicadi and Halwa Prasada are being distributed on Sundays as well as during Festive occasions among the visitors to the temple and in slum areas in the vicinity of Bhubaneswar and Cuttack. During car festival around one thousand Prasada plates are being distributed at Sri Gundicha Temple premises daily for nine days. Similarly during Chandana Yatra Festival Prasadam is distributed for 21 days. This programme is getting high appreciation from the public. During the preceding years we have distributed around one lakh plates of Krishna Prasadam.

To carry on this Food for Life program during the days to come we are looking forward for generous public patronage in a bigger way than the past years. Please rise to the occasion and extend your helping hands for this benevolent program.

Any pious person / family interested to be associated in the Hare Krishna Food for Life program, one of the front-line social programs of ISKCON, Bhubaneswar, may contact: HG Satyananda Bharati Das, Mob – +91 9938513347